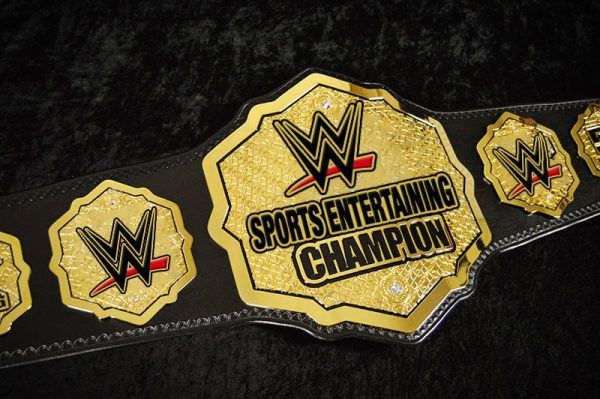 World Wrestling Entertainment (WWE) unveiled a new Universal Championship belt on last night’s episode of Monday Night Raw, but the most coveted prize in sports-entertainment was met with a smattering of cheers, a louder chorus of boos, and a long chant of “What the [EXPLETIVE DELETED]?!”

The belt — or “strap,” as professional wrestlers and pretentious twats on the internet call it — reportedly “captures Vince McMahon’s vision” of what a championship should look like, including the substitution of the words “sports entertaining” for the word “wrestling.”

Longtime wrestling manager and outspoken critic Jim Cornette called the new belt “an abomination,” and said anyone could “run through a kleptomaniacs convention wearing it and nobody would try to steal it” (a remark that drew fire from the American Kleptomaniacs Association for its “insensitive” portrayal of chronic thieves.

The belt did draw some praise, however, including from the creator of WWE’s 24/7 Championship, six-year-old Timmy Simpson, who said the new Universal Championship is “fwickin’ awesome.”

Although billed as “ten pounds of gold,” the new Universal Championship is actually made of a lightweight and cost-effective aluminum alloy weighing a mere 1.3 pounds, which meant it could be produced in a Chinese factory for a mere $2.71 (thereby reducing the replacement costs, since Brock Lesnar frequently misplaces the Championship when he is its holder).

WWE is reportedly revamping all its championship belts, including a redesign that will turn the two matching Tag Team Championships into one large belt to be worn by both partners simultaneously.