Fed up with being “disrespected” by long buffering times and low-res streaming, volatile professional wrestler CM Punk has “walked out” of his six-month commitment to the WWE Network.

Sources close to Punk confirm that the popular WWE superstar “has had enough” of blocky, pixelated video quality and inexplicable freezes while trying to watch and admire footage of his past matches.

Despite signing up for the mandatory six-month contract with WWE Network, which provides unlimited access to the video-streaming service for the affordable price of $9.99 monthly, Punk abruptly bailed out on his contractual obligation.

Punk’s rebellious actions come as little surprise to those who have followed his professional wrestling career, given his established history of storming off like a petulant teenager whenever he perceives he has been mistreated or disrespected (despite the millions of dollars he earns and near-universal adoration from fans).

In recent weeks, Punk “walked out” of his performance obligations with World Wrestling Entertainment — an absence explained euphemistically by the company as a “sabbatical” — and later walked out of a Chicago-area Applebee’s after not receiving preferential treatment.

Unconfirmed rumors suggest that Punk recently walked out of a Walk-In Clinic, just to be a contrarian.

Keep it Kayfabe: Get the shirt! 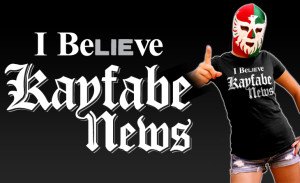