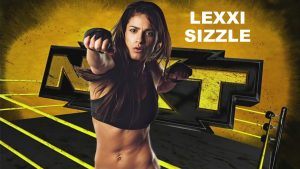 When Lexxi Sizzle burst onto the NXT scene last week, attacking Ruby Riot in the locker room before storming the ring and declaring herself the new “Bad Girl of NXT,” fans were shocked by the brazenness of the brawling brunette.

Sizzle arrived at Full Sail University without fanfare but made a lasting impression on fans and put the entire women’s division on notice.

But who is the new girl on the block? We did a little homework, and dug up these five fascinating facts about the femme fatale.

5. Her uncle is none other than WWE legend The Magnificent Muraco.

Lexxi Sizzle (born Jessica Muraco in 1984) is the niece of Don Muraco, who trained her at his gym in Hawaii before she garnered modest success on the independent wrestling scene in Maui and nearby islands.

4. She was a fitness model in Hawaii before working for three years as assistant to illusionist David Copperfield.

That’s right, Lexxi spent much of her early 20s in showbiz, getting sawed in half and levitated by one of the world’s most renowned magicians. She quit magic amid allegations (later disproven) that she leaked Copperfield’s secrets to rival magician Criss Angel.

3. She has seven cats, each named after one of her favorite wrestlers.

The cats are named Santino, Ryder, Styles, Lita, Molly, Edge and (the biggest one) Ladd.

2. She worked for nine months as a sparring partner for MMA fighter Ronda Rousey.

According to backstage rumors, WWE is hoping to capitalize on some real-life animosity between “Rowdy Ronda” and “Sexi Lexxi” for a possible main-roster feud, and perhaps even a WrestleMania showdown.

1. Lexxi Sizzle does not exist.

We made her up. We grabbed a photo of some fitness model and figured “Lexxi Sizzle” sounded like a lady-wrestler name. The fact that you made it this far in the article means you probably have as difficult a time as we do keeping up with the NXT roster.

Previous Article
Lesnar joins cast of Dancing With the Stars