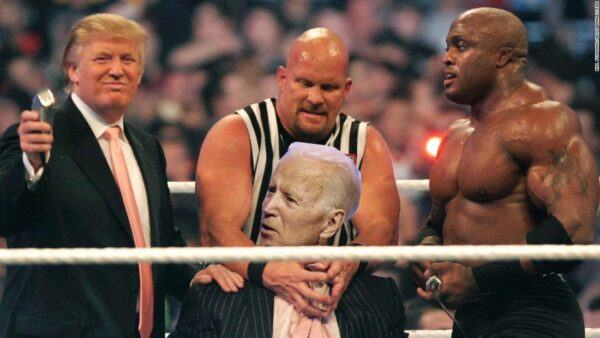 WWE Hall of Famer Donald Trump says he will re-create a famous moment from his wrestling career by shaving the head of presidential rival Joe Biden after defeating the Democratic candidate in a “landslide win” in the American presidential election next month.

“Joe Biden be balder than Vince McMahon was after I shaved him in the greatest WrestleMania showdown in history.”

Trump was referring to the match at WrestleMania 23, in which he says he “single-handedly defeated Vince with a moonsault” (fact check: Trump hired Lashley to be his surrogate fighter against McMahon’s hand-picked representative, Umaga).

The president says he will shave Biden’s head with the same pair of clippers he used on McMahon, though this also appears to be a fabrication, since those clippers are on display in a bulletproof glass case at the WWE Hall of Fame.

Although most polls show Trump losing the election, the president has enthusiastically a poll that shows him with a 66.6 percent chance of winning — a poll conducted by lead White House Statistician, Prof. Scott Steiner.

Next Article
Get a sneak peek at Brock Lesnar’s forthcoming hip hop album!