Amid escalating tensions and military hostilities between the west and Iran, WWE Hall of Famer and US “President” Donald J. Trump said today that his newly appointed Ambassador to Iran, Khosrow “The Iron Sheik” Vaziri, will “make Iran humble again.”

“He will make the Iranians very humble, believe me, so humble,” Trump said during a White House press conference. “Nobody knows humble better than me, and a lot of people are saying I’m the best at it.” 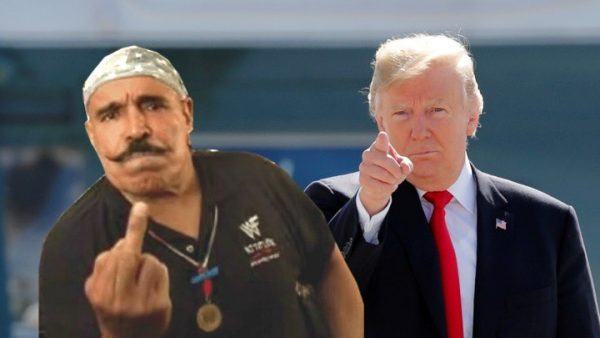 The Iron Sheik rolled onto the stage at the press conference and immediately began verbally berating everyone in attendance — Trump included — with a string of profane comments peppered with the word “jabroni.”

When asked by a reporter how he would address the heightening tension between the US and Iran, the Sheik spat dramatically with an exclamation of “ach-tooie,” and began swinging heavy clubs over his head.

Some democratic lawmakers are criticizing Trump’s choice, suggesting that the new ambassador has shown sympathies to Iran, as well as Russia, in the past.

Others, however, believe Trump’s appointment is an underhanded way to get the Sheik to “go back to where he came from” — a phrase Trump used in his first 27 tweets of the day.

Previous Article
Which commentary duo is superior: Young and Graves, or Heenan and Monsoon?