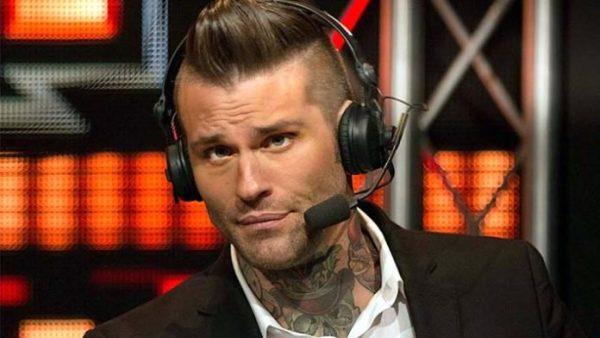 Remember that arrogant pretty-boy who sat behind you in tenth-grade chemistry class — the one who was popular with girls even though he was super-condescending and made the less-confident guys like you feel insecure? Well that guy is now a minor celebrity as a TV commentator for World Wrestling Entertainment!

Yep, that smarmy know-it-all who wouldn’t shut up about why Tool’s Ænima is so much better than any albums you liked now has a weekly international platform on which to verbally berate his fellow commentators in that tone that made you want to slam his smug face into his locker.

Get this: he has a neck tattoo now! Yep, he’s one of those neck tattoo guys. In fact, he’s covered in tattoos, but of course he calls them “ink” and insists they all “tell a story,” even scary skulls! Before he went into wrestling, he worked as a piercer. Haha, “worked.”

Oh, and you should see some of the stuff he has done with his hair. You know that thing where the sides are completely shaved and the top is sculpted with a vat of gel? Yeah, it makes him look like Ivan Drago’s wife in Rocky IV.

He now makes a lot more money than you do, because of course he does. But he was always that way in high school too, always coming up with more money-making schemes than his hero, Zack Morris from Saved by the Bell. And he’s still hurting people’s feelings with his smug remarks, so that hasn’t changed either.

Perhaps you’ll take some solace in knowing that he got himself in hot water by picking on a coworker with mental health struggles, which was clearly motivated by jealousy because his coworker is the superior wrestling commentator by an enormous margin. So there’s delicious nugget of schadenfreude for you to enjoy.