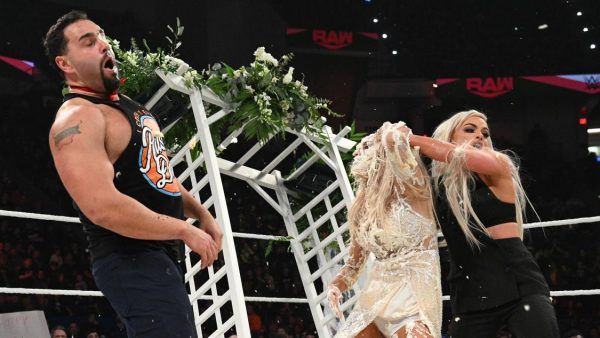 Fans of World Wrestling Entertainment (WWE) are in for a wild ride tonight when Bobby Lashley and Lana return to the ring for a “do-over” of their ill-fated wedding, which was interrupted last week by Liv Morgan, who something something something.

Lana and Lashley were shocked last week when, just as a priest was about to pronounce them man and wife, the scorned Morgan declared in front of the live audience: “Lana and I are lesbians and we have lesbian sex and that’s hot because we’re both buxom blondes and WWE’s creative team isn’t very creative. I mean, what is this, 2002?” (We are paraphrasing, but that’s the essence of what she said).

All heck broke loose when Lana and Morgan, two buxom blondes in highly revealing attire, began pulling each other’s hair and rolling around because Vince McMahon still has the mind of a 12-year-old boy who just found a copy of Hustler under his father’s workbench.

Things got even crazier when Rusev burst out of a preposterously large yet completely ignored cake, because that makes total sense, then he and Lashley had a fight because that’s what real men do to win the affections of buxom blondes and their lesbian lovers or something.

Because last week’s wedding was so rudely interrupted, Lana and Lashley will attempt the nuptials again on Raw tonight, because this is the kind of hamfisted claptrap that we wrestling fans are willingly force-fed like a bunch of fois gras geese.

But tonight there’s a unique twist! Rusev will be shocked to find out that something something something, and Lana will tell Lashley that she is yada yada yada, and hoo boy, it’ll be something. Tune in tonight to watch it all unfold, or do something more productive for your intelligence by thwapping yourself in a forehead with a sock full of quarters.

Next Article
#FatJericho hashtag trends amid online body-shaming by #FatterFans