Marty Jannetty confesses to hurling himself through window in 1992 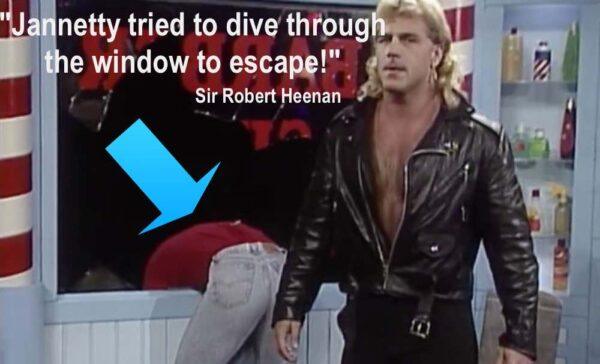 Sports-entertainer and 60-year-old adolescent Marty Jannetty has continued a bizarre string of confessions on Facebook, this time finally fessing up about the destruction of a hairstylist’s window, causing dozens of dollars in damages.

Jannetty (real name Martin Hickenbottom) admitted to the 1992 misdeameanor in a rambling, late-night post: “Yah lol that was me,” he wrote, cryptically adding that this was “not the first time” he made a plate-glass window “disappear.”

This confession comes after a series of others, such as his recent admission that he committed the 2007 bombing of Vince McMahon’s limo.

While the mainstream wrestling media (MSWM) parroted the “official” story that Michaels was to blame for the shattered window, only broadcast journalist Robert “The Brain” Heenan correctly asserted that Jannetty had jumped through the window in a cowardly attempt to escape.

It is unclear whether Jannetty will be charged with the crime, since there is a 10-year statute of limitations on criminal defenestrations.