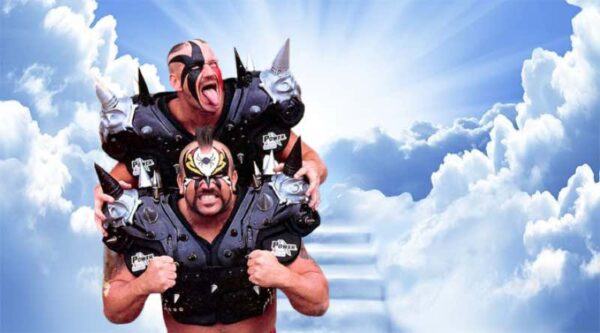 The Pearly Gates of eternity were reportedly “ripped clean off their hinges” by what witnesses described as a “ferocious Animal” that galloped down the Tunnel of Light, clearly in search of its long-lost partner.

Soon Animal and Hawk were back together after nearly two decades apart — and it was as if they hadn’t missed a moment.

Animal and Hawk, warpaint applied, thus began to blaze a path of destruction through the boundless expanse of eternal spacetime, starting with a particularly brutal attack on former frenemies Dusty Rhodes and Rick Rude (both of whom secretly loved those good old super-stiff clotheslines, which no longer actually hurt).

Commentator Bobby Heenan quipped that Hawk and Animal “look to be in fantastic shape, aside from not actually having physical bodies anymore,” to which Gorilla Monsoon responded “Will you be serious?”

“This is awesome,” chanted Heaven’s billion-voice Chorus of Angels, again and again, as Hawk and Animal delivered the Doomsday Device to Earthquake and Giant Gonzales at the same time, because Heaven is cool like that. “This is awesome,” they harmonized again, thrumming their harps rather than doing the clap-clap-clapclapclappy thing.

The rampage unleashed by the Legion of Doom in the afterlife over the following hours and epochs was described by Hawk, quite frequently and enthusiastically, like this: “Oh, what a rush!”

Back on Earth, wrestling fans remained stuck in their physical bodies (for now), sad but reflecting with happy memories of the greatest wrestling tag team there ever was, period.

“Keep politics out of wrestling,” insists guy who clearly doesn’t understand what wrestling is

Did WWE Raw Just Draft Itself Out of Business?

The Great Khali is coming back — leaner, faster, and two feet shorter than before!

Did WWE Raw Just Draft Itself Out of Business?

The Great Khali is coming back — leaner, faster, and two feet shorter than before!