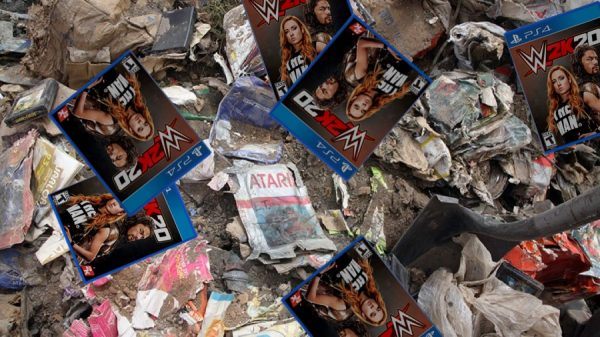 After widespread complaints from dissatisfied customers over glitch-addled gameplay and useless fixes, the makers of WWE 2K20 have reportedly disposed of more than 1.4 million unsold copies of the game in a landfill in Alamogordo, New Mexico.

Truckloads of the game were transported this week to the same landfill where, in the 1980s, Atari dumped copies of the rushed-to-market flop E.T. videogame, which bears many of the same flaws as WWE 2K20.

In both E.T. and WWE 2K20, for example, players immediately fall into a pit from which escape is impossible (but in the latter, players crash through a wooden table at the bottom of the pit).

Among the other glitches that have plagued WWE 2K20:

The New Mexico landfill was chosen as the dumping site for the games because the yard behind WWE’s Connecticut headquarters is already the burial ground of 3 million gallons of unsold ICO PRO.

Where Are They Now? ECW’s The Sandman

Where Are They Now? ECW’s The Sandman