Lacey Evans, a sports-entertainer and Southern belle of WWE fame, is currently speeding down Alberta’s only highway pursued by dozens of Canadian police, hours after posting a video that has since gone viral depicting her verbally berating an officer and Canada. 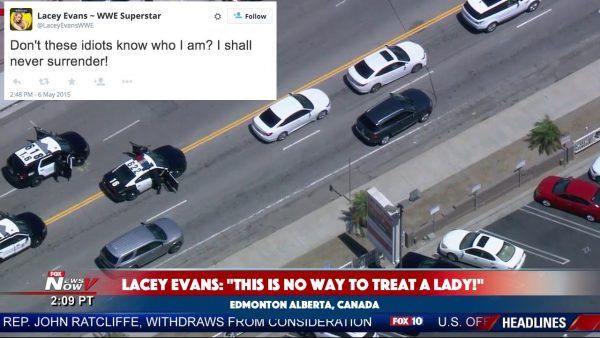 Witnesses describe Evans’ perfect blonde hair whipping freely in the wind as she careens from one lane to the other in her pink 1959 convertible Corvette, with an enormous squad of  in hot pursuit in cruisers and on horseback.

The chase began after Evans, upon being pulled over by an RCMP officer for speeding, tore up her ticket and declared that “Canada is terrible,” all while filming the event with her phone.

That video went viral and was covered by major news networks because it is so rare nowadays for a heel to maintain kayfabe in public that gullible dumb-dumbs don’t realize it’s a work and they put it on the news.

What the video does not show, however, is that Evans then sped off from the scene, tires squealing as she nearly sideswiped a moose and ran over a roadside maple syrup stand.

The RCMP confirms that “more than 50 cruisers,” which is roughly 70 percent of Canada’s police cars have been tailing Evans for the past 400 miles. It is believed she is making a break for Manitoba, a lawless province populated with criminals and feral pig-people.

A WWE spokesperson denounced Evans’ description of Canada as “terrible,” clarifying that the country is merely “boring.”

Previous Article
Mysterious “whistleblower” turns out to be Bill Alfonso