Football fans gearing up for their half-assed knockoff of WrestleMania

Fans of professional football are excitedly preparing for the biggest event of their year — the dull, bastardized knockoff of WrestleMania.

The annual Super Bowl has become a beloved tradition among football fans, who don’t seem to mind that it is a paltry imitation of professional wrestling’s flagship pay-per-view spectacular.

Millions of football fans will spend most of this afternoon guzzling beer, which might help them forget that the the “sport” they are watching is a predetermined charade of simulated combat.

The vast majority of Super Bowl viewers, mind you, will be bandwagon-jumpers who paid no attention to football during the regular season, but instead simply want an excuse to eat six pounds of chicken wings and watch the bloated, lip-synched halftime show. The rest will be gullible marks who think football is real.

When asked by reporters which team he picked to win the Super Bowl, WWE Chairman Vince McMahon replied: “Super Bowl? Never heard of it.”

Keep it kayfabe: get the shirt! 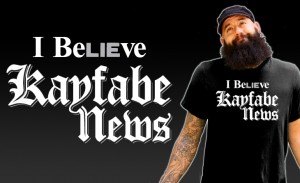 Next Article
ECW reunion quarantined after outbreak of Corinovirus