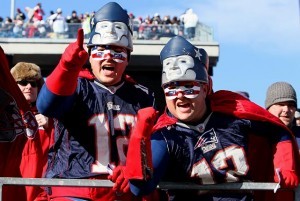 Believe it or not, there are still people out there who actually think American football is a real sport in which two teams engage in a legitimate athletic competition.

Such fans are known in football lingo as “marks” — credulous dupes who believe that two teams of 11 players on the so-called gridiron actually toil in fierce opposition to advance a pigskin ball up and down a field to score points.

While most fans are now “smart” — that is, they enjoy the choreographed spectacle of football because it represents a simplistic pantomime of violence — some don’t realize the outcomes are predetermined.

For example, at today’s Super Bowl spectacular — a boring WrestleMania rip-off — some fans will not understand that the New England Patriots will “go over” when the Atlanta Falcon’s “do the job” in a screwjob Dusty Finish schmoz.

Previous Article
Purple ring ropes: can cruiserweights wrestle within any other color?