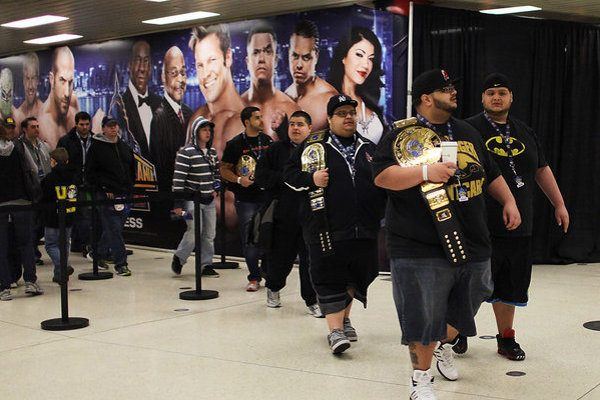 Whereas professional sports-entertainer Brockley “Brock” Lesnar ha not defended his WWE Championship since November, 22-year-old Brad Gibbons of Tallahassee has faced numerous other fans vying for the replica WWE Championship belt he bought with seven months’ worth of Arby’s earnings.

Gibbons, who enjoys walking around wrestling events and conventions with his replica belt (or “strap,” as he calls it) slung over his left shoulder, says he is “ready to take on any challenger,” whether a fellow fan or his seven-year-old nephew on a trampoline.

Just last weekend, forever, a fellow fan at Legends WrestleReunion in New Jersey challenged Gibbons to a match, which Gibbons won by sitting on the challenger’s chest (referee Danny Davis offered to do the three-count in exchange for 20 bucks).

Lesnar, on the other hand, has not defended his championship since defeating Dominic Mysterio’s dad at Survivor Series in a match that was based on the ludicrous premise the pint-sized luchador could defeat the Beast Incarnate.

On this week’s episode of WWE Raw, Lesnar announced (via his mouthpiece and life partner, Paul E. Heyman) that he would not defend his championship at the Royal Rumble, instead competing in the event’s namesake battle royal.

Gibbons, on the other hand, says he defends his aluminum-and-pleather championship “under 24/7 rules, anytime, anywhere, except after 9pm on weekdays because sleep is important.”

To defend his replica championship, Gibbons uses replica maneuvers in replica matches against replica opponents, which gives him replica self-esteem.