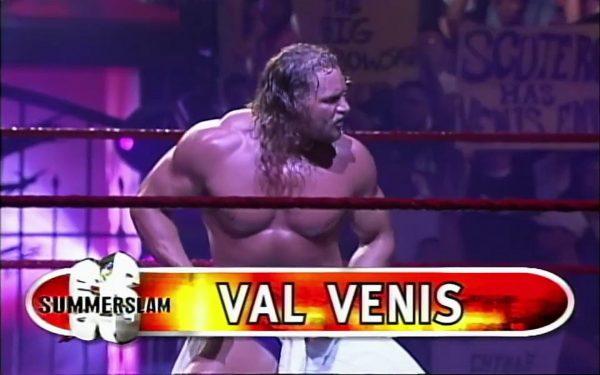 Former sports-entertainer Valentino “Val” Venis, best known for portraying a lascivious star of pornographic cinema during WWE’s so-called Attitude Era, is currently engaged in an uproariously funny diatribe online in which he claims, apparently without a whiff of irony, to have moral high ground.

Venis, a noted conspiracy theorist who vigorously promoted the idea that the basement of a DC pizza shop was a denizen of Satanic child abuse, is currently ranting about how his worldview is the only one with any rationality or decency — and the result is pure hilarity.

“OPEN YOU’RE (sic) EYES, SHEEPLE,” Venis babbled in a rambling screed that somehow traversed the topics of George Soros, cannabis colonics, the subtle genius of the choppy-choppy-your-pee-pee masterpiece, ancient aliens, the dangers of fluoridated water, and the trouble with today’s young wrestlers.

“Ethics and morals are vanishing along with prayer in schools, all because the reptilian McMahon-Bannon-Sanders deep state shadow government is using SOCIAL MANIPULATION to make you mindlessly accept that your (sic) a zombie of liberal-brainwashing.”

Venis, whose catch-phrase was a sleazy cat-call to “ladies” of the WWE audience, is currently arguing that the faked moon landings were directed by Bruce Prichard.