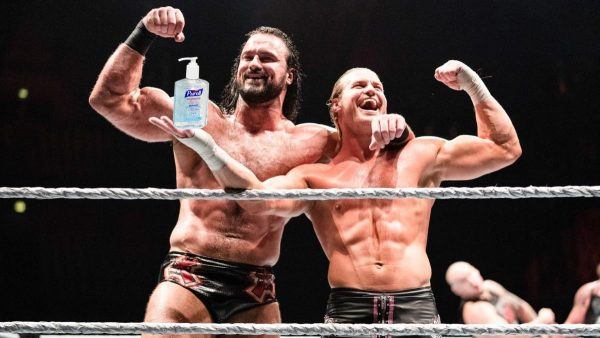 Amid growing fears surrounding the spread of Coronavirus COVID-19, World Wrestling Entertainment (WWE) has mandated that all its professional sports-entertainers must make their rippling physiques glisten using Purell-brand hand-sanitizer instead of Johnson’s Baby Oil.

John Morrison (real name Jonathan Nitro) and Finn Balor (real name Todd Grobowsky) have already been slathering their gorgeous, taut abdominals and perky pecs with Purell for the past several weeks, and since neither of them has become sick, WWE Chairman Vince McMahon has described the process as a “miracle cure” for Coronavirus.

Some critics say McMahon’s claims about the efficacy for full-body sanitization may be exaggerated, though sources close to McMahon say he has never been prone to hyperbole before.

A number of wrestlers at a recent ECW reunion event fell ill — even after smearing themselves in Purell — but it is important to note that they contracted a different strain of the disease called the Corinovirus.

Speculation abounds as to whether WWE will cancel its upcoming WrestleMania event, at which 90,000 sweaty wrestling fans — known for their blase attitudes toward personal hygiene — are crammed into an arena for 13 consecutive hours.

One backstage source confirmed that WWE is considering installing an enormous sneeze-guard around the ring for upcoming events.

Independent wrestler Joey Ryan has been drizzling hand sanitizer into his trunks since 2018, and says he has grown accustomed to the burning sensation.

Next Article
The Champ is Back? WWE’s new “spinner” Universal Championship hints at full-time Cena return