WWE has never been more amazing than it is right now, confirms WWE poll 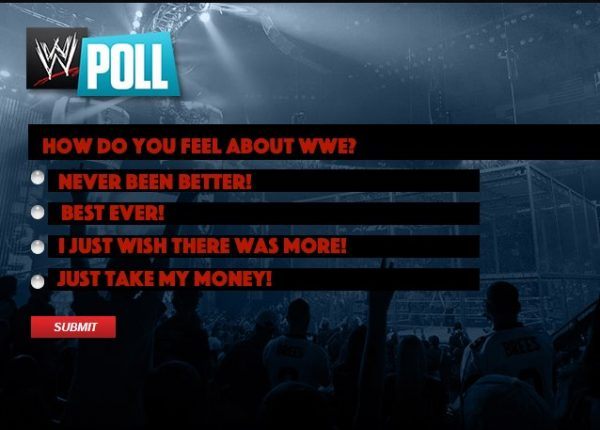 It’s unanimous! A recent poll conducted on the objective and unbiased WWE App confirms what most of us already knew: WWE programming has never been more captivating and compelling than it is right now.

According to a press release issued by WWE this morning, a full 100 percent of online poll respondents — of whom there were “more than nine billion” — said WWE is “better than it has ever been, ever.”

The poll — titled “Which Era of WWE is Greatest?” — yielded the following results:

The poll also asked fans which aspects of WWE programming they love the most, which yielded answers including:

Some sports-entertainment journalists have alleged that the poll results may be exaggerated — or even fabricated — to put WWE in a more positive light than is actually warranted. But that would imply that WWE is inherently dishonest, which is too horrifying a possibility for us to even ponder.

Previous Article
McMahon blames fans for declining ratings: “Quite frankly, they should watch no matter what!”

Next Article
OPINION: WWE Raw needs to be extended to 4 hours