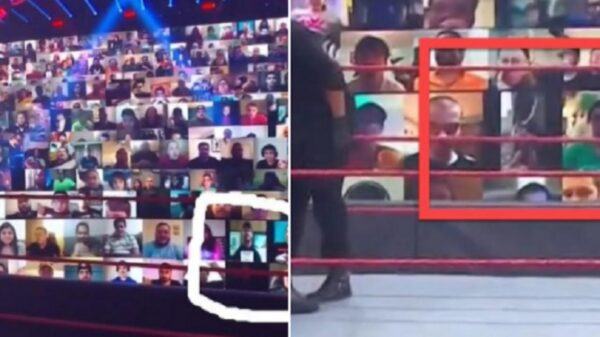 World Wrestling Entertainment (WWE) is clamping down on fans who are “squandering” their coveted spot in the company’s expensive new ThunderDome virtual arena.

The dissention began when one fan replaced his/her webcam footage with a sign saying “FIRE RANDY ORTON” in protest of the veteran’s growing infamy as The Legend Kicker.

WWE has issued new rules forbidding fans from expressing any ideas or opinions that do not “conform exactly” to “approved messaging.”

But this crackdown is inspiring more WWE fans to their fleeting moment in the spotlight to make political and moral statements, including:

– The online movement to absolve Snitsky of blame for various misfortunes has launched the “NOT HIS FAULT” campaign, with a logo of a punted baby

– Numerous liberal antifa snowflake Satantic child murderers are demanding the removal of Donald Trump from the WWE Hall of Fame due to his controversial remarks about grabbing Divas by the puppies.

Fans in the Thunderdome are encouraged to cheer and boo and express themselves freely, as long as they do so “in strict adherence to pre-approved guidelines, by penalty of deportation.”

Previous Article
The ninjas of Retribution — are they Druids in disguise?