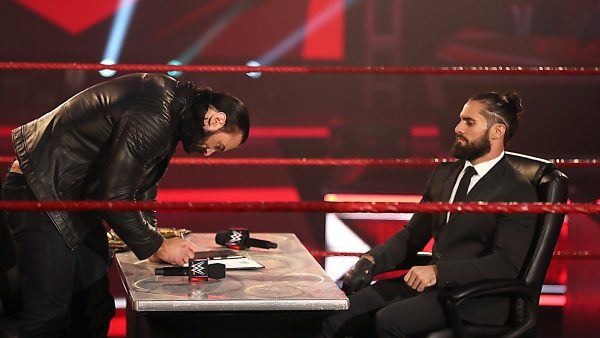 Fans of professional sports-entertaining were united in befuddlement today after witnessing the unprecedented: an in-ring contract signing unfolded in an efficient, mutually agreeable formalization of a legally binding document, followed by cordial niceties.

The grapplers, former 3MB member Drew McIntyre and Seth Todd Rollins, both seemed pleased that the proceedings unfolded precisely as a typical legal procedural formality should. Both men were eager to re-try the signing after tempers flared a week earlier, resulting in a messy impromptu brouhaha.

Typically the two signees of such a document would, at some point in the process, find themselves overcome with an uncontrollable lust for violence, which typically results in a signed document, a broken table, and a deafening silence where a “holy sh**” chant should be.

Instead Rollins and McIntyre n bumped elbows, exchanged well wishes, and went their separate ways to begin training for the big fight they just signed into reality.

WWE issued a rare apology for the unusual happening, and said all future contact signings will be “total shitshows.”

Previous Article
Will Pentagon Jr. ever escape the shadow of Pentagon Sr.?

Next Article
Styles returns from grave, sees shadow — so bundle up for a chilly spring