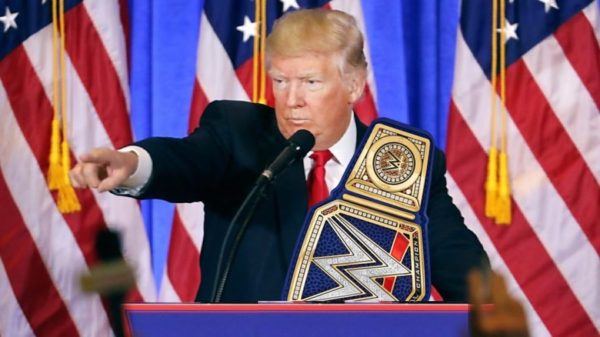 WWE Hall of Famer and impeached US “President” Donald Trump was reportedly “cock of the walk” around the White House yesterday as he smugly strutted around the West Wing and held a press conference with a replica pro wrestling championship belt slung over his shoulder.

“See this 20 pounds of gold — this is what it’s all about,” the president said sneeringly while confidently patting the face of the faux-gold replica, which he bought last week with $500 previously allotted for police reform.

“To be the man,” the president slurred after a reporter asked him a question about the worst economic downturn since the Great Depression, “you’ve gotta beat the man, and I am the man — believe me, a lot of people are saying I’m the best WWE champion of all time — and I am a man with a very large brain and a very large you-know-what, very large, believe me, large.”

The president then spent 45 minutes telling reporters how he shaved Mr. McMahon’s head, bought and sold Raw, won the Brawl for All, body-slammed Andre the Giant, and singlehandedly defeated WCW.

Trump reportedly intended to keep the replica championship in a glass case in the Oval Office, but like all grown who walk around wearing championship belts despite having done nothing to earn them, the president reportedly felt like pretty hot shit with a phoney belt draped over his shoulder.

According to sources within the White House, Trump is considering wearing the belt around his waist tomorrow morning, which means it’ll have to be let out a bit.