The US Electoral College Explained for Wrestling Fans 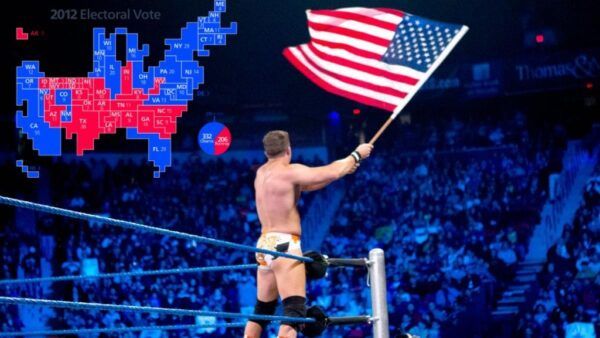 With a historic election unfolding, the Kayfabe News Political Affairs Bureau in Washington has created a handy guide to help wrestling fans understand how the complicated democratic system actually chooses, or “puts over,” a new president of the United States.

Citizens of the US do not directly elect a president, but rather choose “electors” — essentially a creative team — who pledge to “push” a given candidate.

All states, except for jobber states Maine and Nebraska, have chosen a “winner-takes-all” basis, meaning the presidential candidate that amasses the most votes (like a WWE App poll) will be booked to “go over” by the electors.

On rare occasions, the electors will “turn heel” by voting contrary to their pledge — a screwjob swerve that puts the heel elector at risk of party censure (essentially a loser-leaves-town stipulation).

The candidate who receives an absolute majority of electoral votes goes over via clean finish, but if there’s a broadway to a Dusty Finish or schmoz with no absolute majority, the winner is chosen by the House of Representatives, which is like the McMahon family but crazier.

Given that many voters see this election as heel-versus-heel deathmatch, however, whichever worker gets the presidential strap will surely draw X-Pac Heat and be a paper champion for four years until a new babyface gets the rub during the primaries (i.e. political house shows).

Recent polls suggest that the majority of voters would prefer if the Oval Office were occupied by Vacant.

Don’t be a stupid idiot. Buy a shirt!