That settles it: pro wrestling is real, MMA is phony

A long-standing debate among fans of combat sports was settled today when professional sports-entertainer Brock Lesnar defeated mixed martial arts “fighter” Cain Velasquez at WWE Crown Jewel in [REDACTED], proving once and for all that professional wrestling is a real sport and MMA is a phony theatrical spectacle.

Despite boasting an arsenal of flashy maneuvers from his alleged background in “Brazilian Jiu Jitsu” (a made-up discipline like thuganomics), Velasquez did not stand a chance against Lesnar’s professional wrestling background. 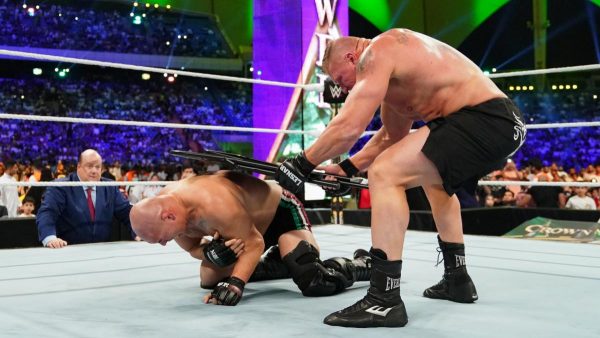 Lesnar made Velasquez “tap out” to a Kimura armbar (move #293 on Chris Jericho’s list of holds), but unlike the so-called “tapouts” of MMA, this one was legitimate.

Velasquez was once a top superstar in UFC (Utterly Fake Combat), having received a major “push” around 2011, and promoter Dana White even put the strap (championship belt) on Velasquez in order to appeal to a hispanic demographic.

But the MMA “worker,” as the performers are known, was unable to “get over” against Lesnar, and this time he “jobbed” not because his boss told him so, but because Lesnar is the superior grappler.

So sorry, MMA fans, but your so-called “sport” is totally fake, and you are clearly inferior for enjoying it.

Next Article
Fall from cell was “not real,” confesses Foley