Sister Abigail to be portrayed by Trish Stratus? Headline phrased in form of question implies so! 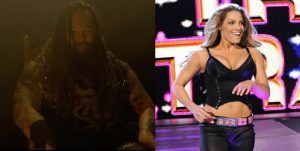 Is legendary WWE Diva Trish Stratus returning to the promotion to portray the mysterious Sister Abigail?

By phrasing the headline of an article in the form of a question — a popular clickbait trick employed by disreputable “news” websites “reporting” stories based on little-to-no credible information — we have now established this unfounded idea as a possibility!

Is Trish’s silence on the matter an indication that she is under a gag order stipulated by her new WWE contract? It’s possible, we suppose, but it’s more possible that it is very easy to fabricate stories and bolster their apparent veracity by using fancy words like “tacit” and “veracity.”

WWE has officially remained mum on the subject, refusing to even hold a press conference, which is code in shoddy journalism for “they’re hiding something.”

Will fans be shocked by the transformation of the former bombshell into a demonic minion of the Wyatt Family? Our prediction, based on no empirical evidence but plenty of speculation, is yes!

WWE welcomes back “ringside regulars” to front row of RAW