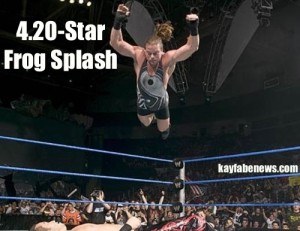 The veteran wrestler ascended the top turnbuckle and, after spending several moments admiring the colorful lights in the arena, leapt onto his prone opponent while humming the melody of Bob Marley’s “Buffalo Soldier.”

Then, while pinning his opponent, Van Dam pondered the enormity of the universe and started giggling uncontrollably about how funny the word “wrestling” sounded in his head.

After winning the match, Van Dam returned to his hotel room, ordered an extra-large pizza and became transfixed by an episode of Teletubbies.

Previous Article
Tensai summoned back to Japan to battle Godzilla