Legendary sports-entertainers of yesteryear will return to WWE tonight for a raucous Raw Reunion, but the show will begin on a sombre note with a 10-bell tribute to the late Katherine “Katie” Vick.

Ever since the so-called Women’s Revolution — which transformed WWE into a progressive, inclusive company that has completely eradicated sexism from the world — fans have demanded that Vick receive a proper tribute. 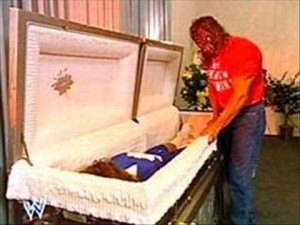 Vick passed away under mysterious circumstances in the 1990s following a date with a Kane Bearer, a former dentist turned pyromaniac turned corporate executive turned mayor.

Allegations that Mr. Bearer defiled Vick’s body in unspeakable ways were leveled in 2002 by Hunter Hearst Helmsley, though the allegations were deemed dubious by many, even after a tasteful televised reenactment of the incident.

Mr. Bearer has long denied any wrongdoing — as has Gene Snitsky, despite never having been blamed for the Vick incident.

Following the 10-bell salute for Vick, Raw Reunion will feature 40 minutes of slack-jawed yokels yelling “what” at Steve Austin, who will then celebrate binge drinking to the delight of millions.