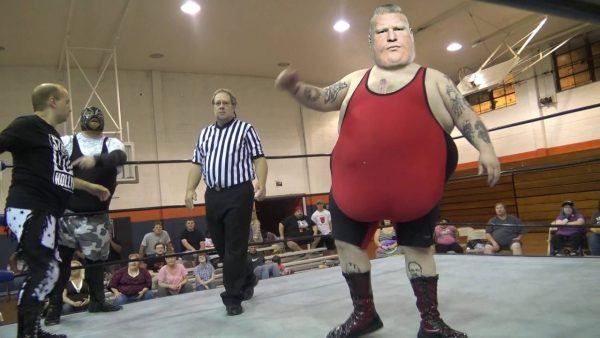 In a sad scene that is all too common among the washed-up sports-entertainers of yesteryear, former WWE Universal Champion Brock Lesnar appeared yesterday at an independent wrestling event, drastically overweight and clearly inebriated.

His once-fearsome musculature now enveloped in layers of flab, Lesnar waddled to the ring before slurring through an incoherent diatribe.

“Imma take alls youz dummies to shuplex schity, bitcshhh,” Lesnar said, saliva dripping from his mouth into the wobbling pectoral cleavage in his ill-fitting singlet and dribbling down his phallic chest tattoo.

Lesnar showed none of his trademark power or speed in the ensuing match-up against “Walking Weapon” Josh Alexander, after Lesnar failed to get back to his feet after losing his breath and fainting during the opening collar-and-elbow tie-up.

In another slurred monologue after the match, Lesnar vowed to “go backta dub-dubyaee,” but he scuttled away in shame after the audience burst into laughter.

Get the ultimate “live” WrestleMania experience with inflatable view-obstructors