Injured Cena gets Make-A-Wish visit from self

Professional wrestler John Cena, already renowned for his tireless charitable work, went above-and-beyond this afternoon by granting a Make-A-Wish hospital visit to his injured self.

“Hang in there, champ,” Cena told Cena, who was hospitalized after injuring his shoulder during a recent Smackdown taping.

“You’ll be feeling better in no time, slugger.”

Cena then posed for photos with himself, and gave himself an autographed t-shirt bearing the slogan “Never Give Up,” which brought a much-needed smile to his face.

Cena then promised himself that he’ll “win back the US Championship soon,” and said he would dedicate the victory to himself.

Doctors believe Cena will be out of action for six to eight weeks due to a torn rotator cuff — an injury witnesses say happened when Cena fell to the mat during a “botched heel turn.”

Although Cena enjoyed the visit from his hero, he later filed a complaint to the Make-A-Wish Foundation, reiterating that he specifically requested a visit from Dean Ambrose.

Get Your Pro Wrestling Crate, Curated by Kayfabe News! Coupon Code KAYFABE for 10% off! 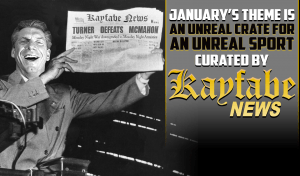 Previous Article
Internet Wrestling Community deemed OK to visit, but you wouldn’t want to live there

Next Article
Kim Kardashian signed to WWE as “Rikishi”

Ever wondered how The Undertaker “balanced” on the top rope? Here’s the hidden secret!

It is time to face facts: AEW needs Ryback

All grown up and seeking justice, punted baby sues Snitsky and WWE