Indy wrestling promoter talks about his “territory” with straight face 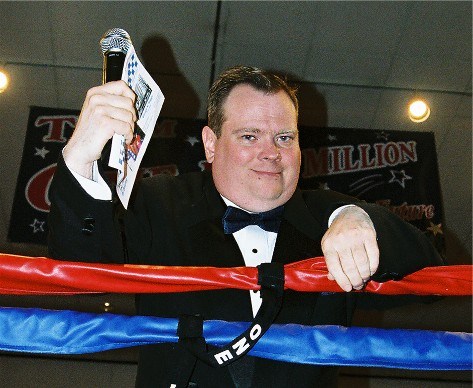 Reggie “Renegade” Reynolds, an Idaho-based independent wrestling promoter, refers to Boise and the surrounding suburbs as his “territory” — apparently without a whiff of sarcasm or irony.

“Yeah, I run the whole territory of Boise and the Greater Boise Metropolitan area,” Reynolds said on the Talkin’ Indie Podcast, of which he is the host. “My territory spans from the Walmart in Meridian on the west side to the Arby’s down south by the bird sanctuary.”

Reynolds’ is the promoter — and reigning “World” Champion — of Renegade Wrestling Syndicate, which runs sparsely attended tri-monthly shows at the Boise High School gymnasium, as well as a charity show at the Boise Seniors’ Recreation Center, which was headlined by Glacier.

Reynolds’ roster of regular “megastars,” as he calls the wrestlers whom he pays with Monster energy drinks, includes his two brothers, Todd and Chris, and four of their high school friends (several of whom also portray masked “Mexican” wrestlers). Greg Valentine was once booked to appear but was forced to cancel due to gout.

Reynolds seems to think he needs to defend his so-called territory against invading promoters and “talent raids,” though nothing of the sort has happened in the past.

“Vince (McMahon) took over all the territories when he expanded the Fed (WWE) and I’m sure he’ll come knocking here too,” said Reynolds.

“But unlike Verne Gagne, the Funks and the Von Erichs, I’m going to hold out. This is my territory, and Vince will have to pry it from my cold, dead hands.”

The next wrestling event scheduled in Reynolds’ territory is next week at a local Jewish boy’s Bar Mitzvah.

Next Article
The nine most important Kayfabe News stories of 2019