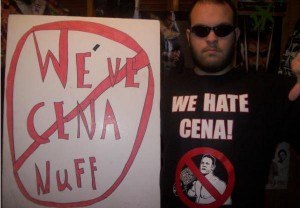 Despite being quite proud of the “Cena Nuff” sign he held aloft at a recent WWE event, 28-year-old Tyson Walters was later overcome with shame when he remembered that he has never “Cena woman naked.”

Like many lonely men worldwide, Walters has spent the past several years channeling his latent sexual frustrations into an intense hatred for WWE superstar John Cena.

Walters spent an entire afternoon creating the “Cena Nuff” sign — which was never actually spotted by Cena or any WWE camera operators — rather than working on his personal grooming or social skills.

John Cena, on the other hand, has “Cena lot of gorgeous naked women,” especially after his divorce last year. This fact has perhaps sparked the seething jealousy that Walters feels toward Cena, which manifests itself as hatred.

Walters’ friends frequently ask him if he has ever “Cena psychiatrist.”