Given his knack for accidentally knocking himself senseless, professional sports-entertainer Bill Goldberg (real name Willy Goldblatt) has been ordered to wear a protective helmet at SummerSlam.

Fans of World Wrestling Entertainment last saw Goldberg, 71, at Super ShowDown in [REDACTED], where he gave a lacklustre performance after head-butting a ring post. 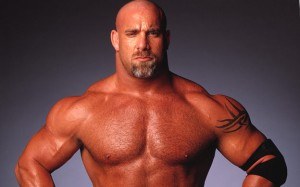 Given Goldberg’s propensity for head trauma — as well as his advanced age and blackened lungs from excessive pyrotechnics inhalation — some pundits believe he should not be wrestling at all.

But his opponent tonight, Dolph Ziggler, is expected to endure all the big bumps and carry the match, because that is essentially his gimmick.

According to one source, who asked to be identified only as Bret H., Ziggler may wear a steel plate under his shirt to protect himself from Goldberg’s spear and helmet.