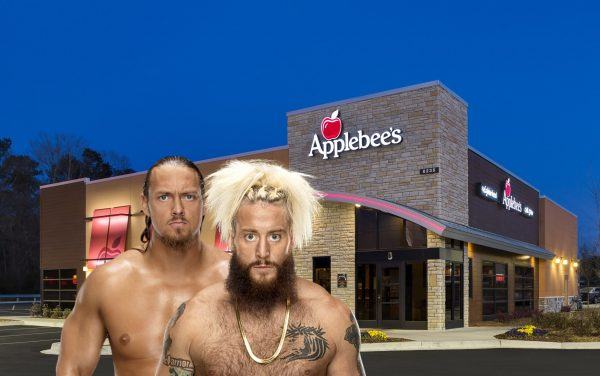 Former WWE semi-stars Enzo Amore and Colin “Big Cass” Cassidy are known as loose cannons prone to “invasions” of wrestling events, but when they invaded a chain family eatery last night they were presumed to be slightly drunken life partners.

“My name is Enzo Amore,” the pint-sized chatterbox said to an elderly woman beside him at the salad bar in a Cleveland-are Applebee’s, “and I am a bona fide G and a certified stud.”

Before Amore was able to complete his catch-phrase with a statement regarding the unteachability of such things, the woman returned to dining with her husband.

Big Cass did not fare much better when describing a waitress as sawft, because the waitress mistakenly believed Cass was asking her about the restaurants selection of sauce.

No amount of Amore’s frantic scuttling about drew more than annoyed glances from fellow diners, and nobody in the restaurant responded when he asked how they were doing.

Forty minutes later, full of jalapeno poppers but starved of attention, Enzo and Cass sat quietly and dejected, the saddest guys in the room.

Get the ultimate “live” WrestleMania experience with inflatable view-obstructors