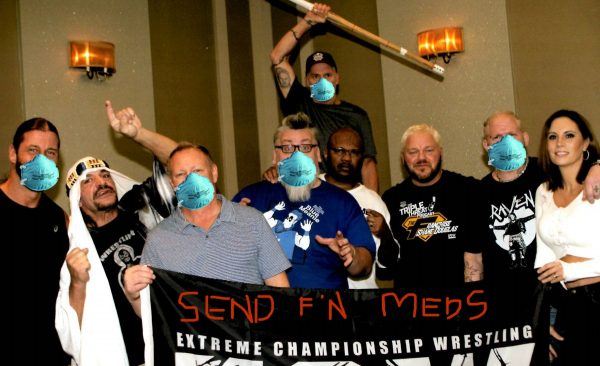 A professional wrestling convention has been fully encased in a protective plastic bubble after doctors confirmed that the event — a gathering of veterans of the ECW promotion — had been breached by the dreaded Corinovirus.

According to disease experts, Corinovirus can only be spread between humans through blood from a small self-inflicted razor nick on the upper forehead.

The so-called “Patient Zero” of the Corinovirus is believed to be wrestler Steve Corino, which we need to explain here for those of you who have not yet figured out the humorous wordplay upon which this entire gag is premised.

Corino has recently been working at a backstage agent at WWE, where the company’s stringent Wellness Policy tests determined in 2019 that he was not a carrier of any known viruses (but his ICO PRO levels were off the charts).

Details are sketchy from inside the protective bubble around the old “ECW Arena” in Philadelphia, but some witnesses said breathing has become so difficult that The Blue Meanie is turning flesh-colored.

Our thoughts and prayers are with the entire quarantined ECW crew, except for Raven, who was a total dick to us, like, eight years ago.