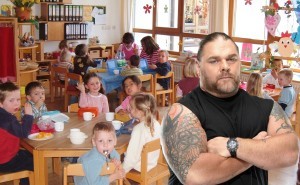 Having resigned from his position as World Wrestling Entertainment’s head trainer, Bill DeMott has reportedly returned to his former career as a kindergarten teacher.

DeMott, whose resignation from WWE’s Performance Center came amid a flurry of unsubstantiated allegations of extreme and harsh coaching methods, is now teaching four-year-olds how to cut paper snowflakes and perform 500 consecutive hindu squats.

“The kids love Mr. Bill,” said one parent of a child at Merryfield Elementary School, where DeMott teaches kids how to cooperate, share, and beg for mercy.

“They especially love it when he reads them a Dr. Seuss story after forcing them to do push-ups until they vomit.”

DeMott is known for a “tough-but-friendly” teaching approach that inspires camaraderie and self-confidence among the children, except when he is screaming at them to stop being pussies and take another 100 flat-back bumps on their naptime rugs.

Though some of DeMott’s fellow teachers worry he might be a little too stern with the children, he insists his methods are in the best interests of his beloved students.

“Kindergarten is an important developmental stage for these kids,” he says, “and I want them to be prepared for when they get called up to the first grade.”

Next Article
Dozens blinded at public appearance by Sheamus and Paige