Pippy Thunburg is best known as an irate WWE fan who disapproved of heel tactics employed by wrestler The Miz, but she will soon join her twin sister Greta’s fight to save the planet.

Pippy unwittingly became the face of a popular internet “meme” (or “Memorable Email”) when her scowling visage was caught by cameras at a WWE event, whereas Greta became the face of the climate crisis when she scowled at WWE Hall of Famer and US “President” Donald Trump. 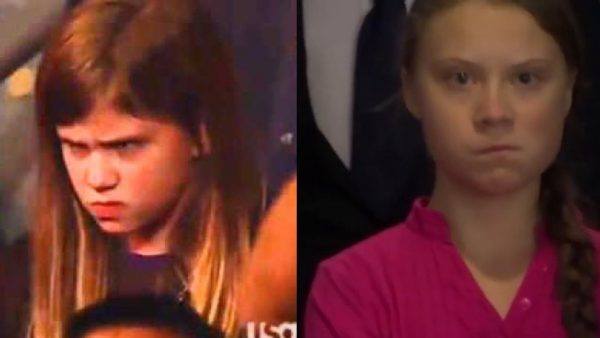 The twin sisters agreed — through their creepy telepathic bond — that they could double-scowl at world leaders to commit to aggressive carbon-reduction strategies.

President Trump, a grown man has dismissed climate change as a “hoax” perpetrated by the Chinese, called the Thunberg sisters “a couple of liberal climate alarmists,” while wading through the ankle-deep seawater that had flooded Mar-a-Lago for some reason.

For particularly stubborn rulers like Trump and Russian President Vladimir Putin, Pippy and Greta intend to use “twin magic” to secretly swap places when the UN’s back is turned, thereby gaining a sneaky advantage over the oligarchs.

“World leaders will cower to their demands,” said The Miz, “because even just one of them is terrifying.”

As to whether climate change is real and caused by humans, the jury is still out. On the one hand, you have the overwhelming consensus of thousands of people who have PhDs and are bound by the stringent demands of peer-reviewed evidence-based researchers in prestigious academic journals; on the other hand, you have memes your uncle shares about a global misinformation plan perpetrated by Satanic liberal elites. Too close to call.