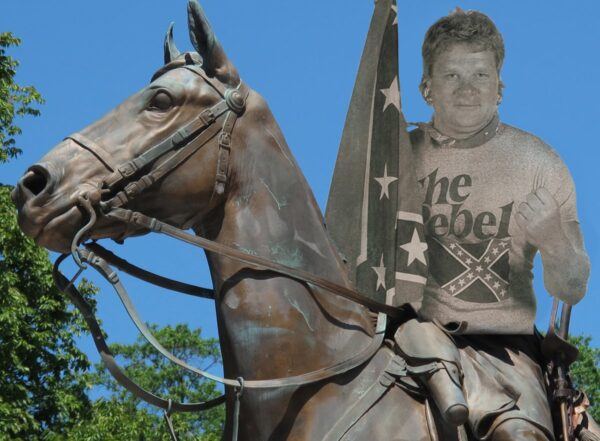 WWE Hall of Famer and US “President” Donald Trump lashed out on Twitter today to criticize wrestling fans who have demanded the removal of a statue of “The Rebel” Dick Slater from the WWE Hall of Fame.

“Dick Slater was a fine, upstanding, dirty dick, and I admire that,” tweeted the President during his daily 3am plotz’n’tweet.

Slater was a top WWF star from late 1985 to early 1986, engaging in long and memorable feuds with the likes of Jake Roberts and many others.

Trump was incredulous that anyone would not want to honor Slater, who wore a confederate flag like a cape during his WWF entrances and, um, well, that seemed to be the full narrative arc of his character.

“If we get rid of a statue of Dick Slater, what’s next?” tweeted Trump. “Are we going to take down status of The West Texas Rednecks and Tracy Smothers? SAD. BAD. SADBAD.”

A statue of Trump himself stands in the Celebrity Wing of the WWE Hall of Fame [reopening July 15! Check out these travel tips!]. The statue is a popular attraction among children who like to feel the president’s tiny hands in theirs.

Previous Article
Remember ECW’s Blue Meanie? You’ll be stunned when you see what he looks like today!

Next Article
EXCLUSIVE! Next season’s “Dark Side of the Ring” episodes revealed

Was Lil Jimmy sold online to an invisible-human trafficking network?