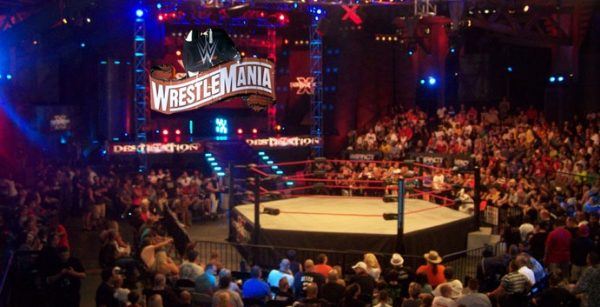 World Wrestling Entertainment (WWE) announced today that, as part of its ongoing efforts to drum up interest its upcoming empty-arena WrestleMania event, a third night has been added, with matches broadcast from the so-called “Mecca of professional wrestling,” the Impact Zone.

The soundstage at Universal Studios in Orlando — just a short drive from WWE’s rookie training gym and indoctrination camp, the WWE Performance Center — is the former home of TNA (Tits N’ Ass) Wrestling, which later changed its name to Ring of Honor.

Due to regulations banning gatherings of more than 10 people amid the Corinovirus outbreak, the Impact Zone will have just a tiny complement of fans on hand, as usual.

The Impact Zone is where many of today’s top WWE stars honed their skills. AJ Styles, for instance, had a brief but unremarkable run in TNA as the masked character “Suicide.” Daniel Bryan was a TNA fan-favorite, performing under the ring name “Chris Sabin,” alongside partner Alex Shelly (now known in WWE as Fandango).

WrestleMania will mark the triumphant return of pro wrestling to the Impact Zone, which for the past five years has been home to a pack of feral cats and Brooke Hogan.